Huntington, West Virginia (May 31, 2019) — A "rodeo on wheels" will test the skill level of bikers Saturday, June 1, in the third-annual Motorcycle Rodeo at New Baptist Church in Huntington.

All proceeds from the event will benefit Lily's Place, a treatment center that cares for infants born with neonatal abstinence syndrome, or NAS.

Unlike cowboys competing to stay on top of a bucking bronc, bikers will compete to see how slow they can go before having to put their foot down. They will see who can drive the farthest across a six-inch wide board on the ground and compete in a relay race that involves digging through mounds of hay. 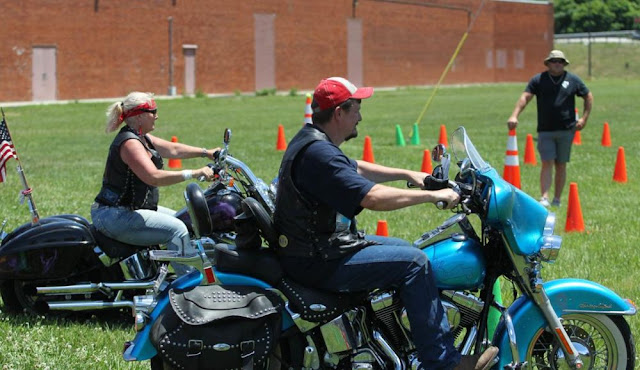 The event is free for everyone to attend and held from noon to 4 p.m. near the church's parking lot on 28th Street. Registration begins at 10 a.m. and will cost $20 per rider and $5 per passenger to enter the competition. There will also be inflatables and a free bicycle rodeo for children.

They initially wanted to hold a charity ride, but decided to do something different after reading about a similar motorcycle rodeo in another state.

They agreed the rodeo should benefit Lily's Place because several members of the church have family dealing with opioid addictions, he said.

"The drug issue has pretty much hit everybody in some form or another and Lily's Place is just really amazing in the things they are doing over there," Skaggs said.

In its first two years, the event has raised $6,000 to benefit the organization. This year, they are hoping to attract at least 40 riders and raise more than $3,000. Every penny from the event and a concession sales goes toward helping Lily's Place, Skaggs said. Prizes will be given to those bikers who display the best skills during the events.

"It's quite a spectacle to watch," he said.

Oliva Meade, director of development for Lily's Place, said she is thankful for organizations and churches that include babies affected by NAS in their fundraising efforts. Fifty percent of her nonprofit's budget is dependent upon people's donations.

Lily's Place opened its doors in October 2014 as the nation's first facility devoted to helping babies born with NAS. NAS is a group of conditions occurring when a baby withdrawals from drugs it was exposed to in the womb before birth, typically opioids. They also help mothers with substance abuse counseling and provide a peer recovery coach.

Meade said Lily's Place has a goal to obtain a behavioral health license to provide billable services to families and donations are important to achieve that.

"In the past year we're still seeing an increase in infants born with NAS," she said. "It is not increasing as rapid at a rate as what we've seen in the last five to seven years, but it is still unfortunately increasing. So we know we have to be bale to increase our own operations to be able to care for babies."