Little girl saved by bikers now fighting for her life

Kansas City, Missouri (December  23, 2018) — The biker bar regulars don’t know why the 6-year-old girl was running across U.S. 40 Highway in the dark, but they think she was running to them at the Tool Shed Lounge when a car hit her Friday night.

The bar at 40 Highway and Phelps Road in Kansas City had been her “safe place” just 10 days before — the first time they saw her out in the dark, dangerously walking along the busy four-lane road. 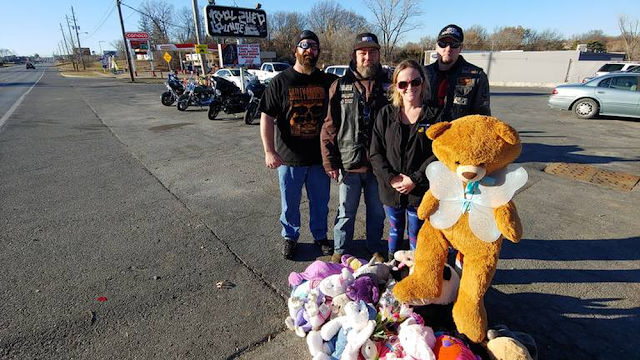 The girl suffered life-threatening injuries when she was hit Friday. She remains hospitalized. And Sunday, the biker friends she barely knows were collecting Christmas gifts for her while wondering — with some anger — why she was out in the dark again.


“She had to be a brave little girl,” Susan McCluer said. “Something was wrong.”

The girl’s identity has not been released. Police could provide no new information Sunday on her condition or about what happened after she was previously picked up from the bar. Spokespersons for the Missouri Department of Social Services were not available.

“We want some answers why she was out by herself again,” said bar patron Jeff Dunn.

Dunn’s daughter-in-law, Sierra Miller, saw the little girl out along the road on Dec. 11. She brought her into the bar and the bar called 911.

They gave her a soda, some chips and set her up playing one of the video game machines until police came. She was also very curious about the collection of wrapped gifts that members of the Biker Advocates group at the bar were collecting as a charity for some families in need this season.

“I think she felt safe,” Dunn said. He thinks that’s why she may have been trying to come back Friday night.

Biker Matthew “Nuffin” Dains was outside the bar and saw her get hit, he said. She was running against the light, going from south to north across the highway. The driver of the car that hit her stopped and Dains and others went to the girl to tend to her until the ambulance came.

Their hearts were breaking for her.

“We all have kids here,” said “Hobbles” Craig, whose eye patch over the right eye of his glasses had the letters B-A for Biker Advocates. “We’re devastated that these things can happen.”

The advocate group was already holding a collection of Christmas gifts to help four families in need, and now they and others are gathering gifts for this little girl.

One collection — of a large teddy bear and other stuffed animals — stacked outside in the sunlight against a construction cone near where she came to rest at the side of the road Friday night. A leftover piece of yellow police tape tied to the cone flapped in the wind Sunday.

Another collection of toys filled up a tabletop inside the bar.

They don’t know how she is doing in the hospital. But they hope someday they can deliver their gifts, said Rachel Fry.

“She was coming here for a reason,” Fry said. “We want her to know we wanted to be good to her.”