Anderson, Indiana (January 7, 2019) – Andy Deane knows all too well the stresses on parents having to plan and pay for not one but two funerals. He went through it with his two daughters, who died of illness.

So he understands what the mother of Javon Blackwell Jr., 12, and Jayzon Blackwell, 11, must be going through personally and financially as she prepares to lay her boys to rest. 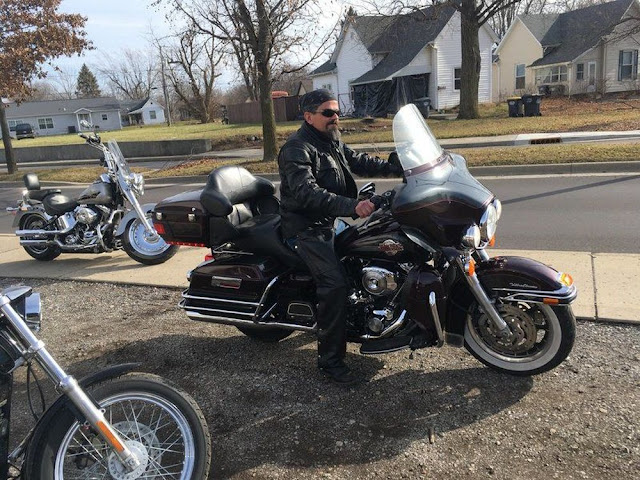 Andy Deane prepares to start up his motorcycle in front of DT's R Bar in Anderson in preparation for a benefit ride to Mount Summit on Sunday.
That’s why Deane put on his bandanna and his leather chaps and joined a couple of dozen motorcyclists who raised money Sunday on a ride sponsored by Second Amendment Riders. The ride started at DT’s R Bar and took participants to 1,000 Degree Wood Fired Pizza in Mount Summit, where the pizzeria pledged 10 percent of its food sales to the benefit.

The motorcycle ride is one of several efforts to raise money for the funerals of the two boys, whose classmates at Anderson Preparatory Academy return Monday from winter break. A GoFundMe page has raised a little more than $1,800 of the $5,000 requested.

Donations may be made at www.gofundme.com/8nzpw-help-for-funeral-cost

The Blackwell brothers and their father, Javon Blackwell Sr., 42, were found shot to death Dec. 30 in a home in the 2300 block of South Gallatin Street in Marion.

Deane, who bought his motorcycle about a year ago, has participated in about three benefit rides since then.

“All the bikers get together when something like this happens in the community,” he said. “I lost two daughters myself, and the community helped me out. I like to pay that back.” 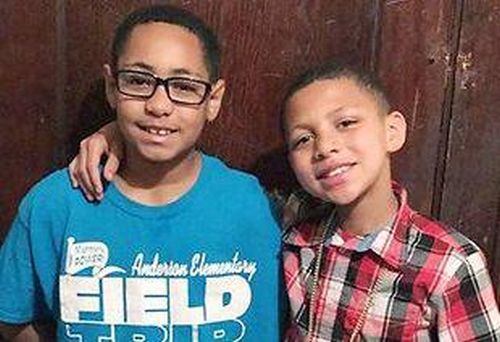 Brothers Javon Blackwell Jr., 12, and Jayzon Blackwell, 11, died Dec. 30 in a Marion home. Both were students at Anderson Preparatory Academy. Photo provided by the family to Fox 59

The motorcyclists benefited from unusually great weather for early January. But that didn’t matter, Deane said. “I’d have been here, rain, shine or snow,” he said.

Jason Mahla of Second Amendment Riders said deaths involving gun violence are exactly the kind of cause his organization gets behind. “We don’t believe firearms should be taken away. We believe firearms are for proper use,” he said.

Though the motorcycle club is helping to pay for the funerals of the two boys, it is at this point helping to pay for the funeral of the father. That’s because the not-for-profit can’t help when gun violence is the result of drug deals or bar fights. “With narcotics found in the house, it prevents us from doing a benefit for him,” he said. “It’s got to be an innocent victim. There’s no way the boys could have been doing something where they deserved to be shot.”

In the end, however, most would prefer to ride because the weather is nice and hope there won’t have to be any more benefits this year, Mahla said. “We wish this cause would never have to be, but it seems people just aren’t prepared for funerals,” he said.

Services will take place following the visitation at noon at the church.

Durant, Oklahoma (January 5, 2019) — Usually, it only takes a little sunshine to bring this many motorcycle riders together. But on Friday, it was all for Dahlia Ussery, who died three days after Christmas, just eight days after she was born. 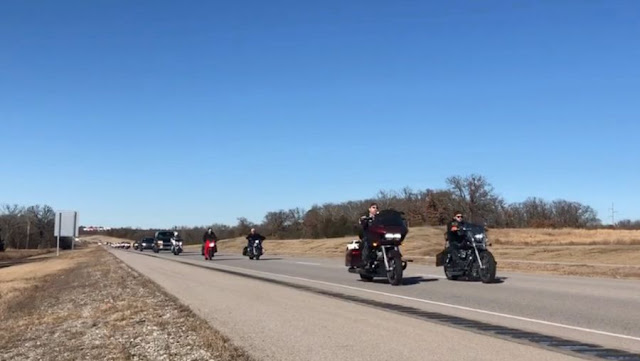 "She was going to be on a bike before she could walk, so this means a lot to me that we had this many people here," said Dahlia's father, Dakota Ussery. Born into a family of bikers, Ussery's only request was to have an escort of bikes that would lead Dahlia to her final resting place. "He asked me to have a few bikes," said grandfather Tim Ussery, "and I just sent out this request and I just sent it out to anyone to help."

Little did they know the request would be shared more than 7,000 times on Facebook, uniting bikers from across the country. "There's no way to describe it... folks from Arkansas, Kansas, all over Oklahoma, all over Texas," said Calera Police Chief Don Hyde.

Brandi Peek is a biker who came all the way from Dallas, can relate to the Usserys' grief. "I lost a child before, so I know how it feels, so I said, 'I want to go out and support this guy and whatever I can do,'" Peek said.

Hundreds of riders escorted Dahlia down U.S. 70, showing that behind the black leather and metal rims are hearts of gold. "People have bad things about bikers, and they come together like you wouldn't believe for each other, and they are good people," Ussery said. "Keep on pushing is knowing that I have a community like this around me."

A selfless act bonded these bikers forever. "It's renewed my thought, my appreciation, my love in people," Hyde said. The family said they're planning a poker run to start a non-profit in Dahlia's honor.