Macon, Georgia, USA (September 29, 2018) -- More than 250 bikers hit the road for a good cause on Saturday, some with extra special cargo on the back. Savannah Walker, who's battling leukemia, loves getting to see the motorcycles at Hawgs 4 Hope.

"A bunch of bikers from different places and groups get together and anybody who owns a bike comes out and signs up and let's kids ride on their bikes from Jones County," Walker said. This is her third year going, and she says each year she's also gotten to ride the motorcycles. "You get used to it. I mean after the first couple of minutes you just have to make sure that your body goes with the bike," Walker said. 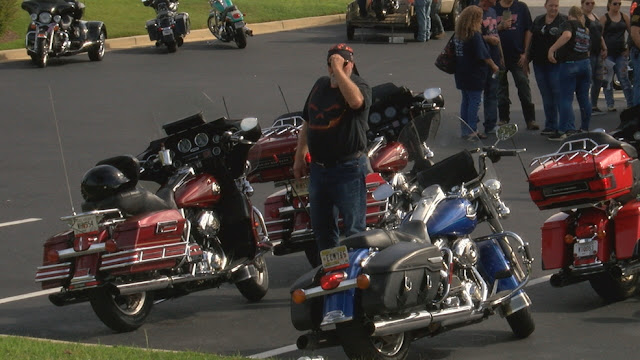 She said each year she looks forward to making new friends. "With some of the stereotypes that people have about bikers and stuff like that, you know its people coming together within the you know community,"

Walker said. Biker William Brady said he loves coming to the event and seeing the smiles on the kids' faces "Hawgs for Hope kids that are able to are going to be able to ride. People that brought any extra helmets and any open back seats or anything that they will let them ride with them," Brady said. He said watching them ride on the bike for the first time is priceless.

He said each biker paid $25 to be here, and that money goes directly to Jay's Hope Foundation. "Once a month they get to do something fun away from the hospital and doctors, and moms get to meet other moms, and the siblings get to meet other siblings," Cindy Gaskins said who founded Jay's Hope.

She said the organization was made for kids just like Savannah and 2-year-old Willow Clark, who need something to look forward to during a battle. Clark's mother Dakota said Jay's Hope has given her just that, hope. Especially after Willow got three rounds of chemo to battle her stage 4 Neuroblastoma Cancer.