Toy Run continues on without the parade

Augusta, Maine (September 8, 2019) — The Augusta Civic Center was filled with hundreds of toys and motorcycles on Sunday due to the 38th annual Toy Run.

"This event brings together different communities of motorcycle riders to help kids in Maine," Katie Reis said, the coordinator of the toy run and a member of the United Bikers of Maine. 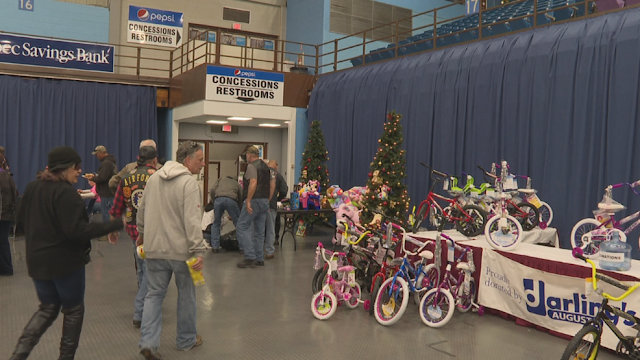 He says the event works by having people bring in toys to donate for kids in need. "It's basically a nice fundraiser and gives the kids that don't have a Christmas, a Christmas," he said.

"We don't want any kids in the state of Maine going without at least a toy for Christmas," Reis said. "We cover all 16 counties, they all get toys including the native american nations in Maine."


This is the first year in the history of Toy Run that the collected toys will not be put on display during a motorcycle parade from the Civic Center to the Windsor Fairgrounds. "We did change this year by having everything done at the Civic Center," Reis said.

That change is because of the 2017 crash that killed two people and injured two more during the parade. "It was a very sad incident," Reis said. "We still want to continue providing for the kids of Maine, so we'll find a different way of doing it."

Dufour says that it's unfortunate the event doesn't have the parade anymore, but he says he's glad the event is still helping kids all over the state. "On a good note, I think there won't be as many accidents because people are coming in small groups," he said. "It's all about the kids. 100 percent is for the kids. Everything it brings in." "We do have a very poor state, we just want to make a difference in kids lives," Reis said.

The event ran from 9 until 3 on Sunday.