Saint Albert, Alberta (February 19, 2019) — Being bullied at school sucks. Having a friend stick up for you is awesome. Having a dozen bikers escort you to school rolling up on Harleys is a total game changer. That’s the philosophy behind Bullying Enns, a group that started as more than a bully deterrent: it stops them right in their tracks. 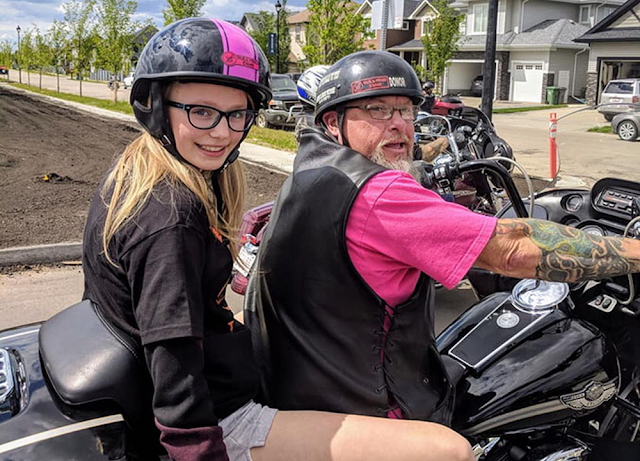 Another satisfied customer gets a free ride on the back of Steve Enns' Harley.
Photo credit: BULLYING ENNS/Photo

The non-profit, volunteer-driven group shows up en force in response to applications made on its website at www.bullyingenns.org. Since 2017, they’ve done dozens of rides in and around the Edmonton area, though they sometimes take the long path to places like Coronation, east of Red Deer. They came to St. Albert for the first time just last week, when a stretch SUV limo pulled up to Sir George Simpson School . Two years ago, Beaumont’s Steve Enns heard of a boy who was having a rough time because of bullies at his school. Enns gathered up several of his motorcycle-riding buddies and “it made a little bit of an impression,” he said. “After I gave this first ride, the bullying stopped and I realized that as simple as this is, it works.”

Enns says the power move isn’t like showing up with a gang that’s bigger and badder than the other guy’s gang. Instead, Enns prefers to call it passive intimidation. They don’t bully the bullies back. They only look tough, and having strength in their numbers does help the show a little bit too. “When we show up there, we’re all smiles, laughing and joking. We never know who the bully is. Everybody gets treated the same as if the kids want to come take a look at our bikes. We’ve had all sorts of kids just jumping on our bikes and asking questions. There’s absolutely no intimidation meant,” he continued. “It’s a big ego boost. ‘Hey, this guy’s got cool friends,’ you know? ‘He’s not so bad.’ They get the conversation going in the school. Also, it’ll get kids talking to the bullied kid that might not normally talk to them.”

St. Albert’s Jessica Jones said it was a very special moment for her daughter last week, who she said has been bullied horribly for more than four years, including racial and other slurs, physical violence, cyber bullying and relentless text messages suggesting she kill herself. Jones added she has tried dealing with school officials but their “hands are tied.”

“It breaks my heart to have my daughter coming home on a daily basis saying that she doesn’t want to go to school and everybody hates her and she’s stupid, basically repeating everything that everybody else is saying to her,” she began. After making the arrangements with Steve and his riders, her daughter told her something entirely different.

“My daughter, for the first time in her life, looked at me and said, ‘Mom, I’m going to be so popular tomorrow.’ She was so ecstatic to go to school. They told her, ‘You’re going to be our sister. You have 100 brothers just like us. To her, it put a spark back in her eye.”

Tracy Detta-Fehr said her 11-year-old daughter has been on suicide watch twice in the last two years because of bullying. Steve Enns showed up with some of his friends to help out. One day last June, 35 motorcycles roared up for the first time. Those riders kept coming back to see their “little friend,” too.

“My daughter was giving up. This was such a huge support for her. She realized that these guys care and will continue to care. She’d be all excited that a group decided to drop in,” she said. “These guys do it from the heart. She’s going through a down time, but she is strong enough now to know besides Mom, she has big friends she can reach out to.” Enns says he has talked with a lot of people who want to help because of the scope of bullying and the pervasive impacts it has on its victims.

“It’s actually a pretty big problem. I wish I could help more people there. There’s been a lot of rides where I have welled up. There’s been a lot of rides with big burly bikers come up to me and they go, ‘Man, I had to keep my sunglasses on because there were tears coming down.’ It is actually pretty emotional. I hear some pretty crappy stories. There’s some rides that you almost actually feel emotionally drained afterwards.”

Because it works as a non-profit, Bullying Enns fundraises and hosts special events to support its activities. Next month, it will host a ski event at Sunridge Ski Hill and a poker night in Okotoks later on.