The run began in the Merritt Island Square Mall parking lot located at 777 Merritt Island Causeway around 10 a.m. Riders then traveled, in small clusters, to Titusville with toy donations to be dropped off at the American Legion Post 1 located at 1281 U.S. 1. 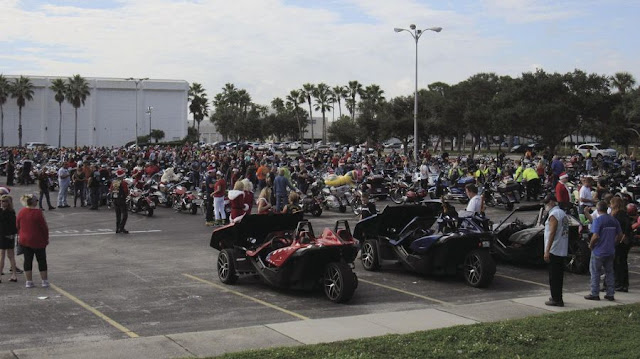 This was the 36th year for the run, which raises toys and fund for local Brevard children. SCMA, a local motorcycle community organization, provides charitable activities and fundraisers for specific purposes such as helping the less fortunate, accident victims, or those will medical issues.

Robin Bailey, president of SCMA, was responsible for much of the toy runs organization, including its ending location at Post 1.

The toys collected will go to children in Brevard County this Christmas season in an effort to help families in need. Some of the local charities on the toy recipient list included C.I.T.A. Mission, Daily Bread, God’s Pantry and more. Mrs. Bailey also noted that some of the recipients of the donations are families of combat veterans.

The event was largest hosted by the AL Post 1, who volunteered their post's location after other venues in the county declined to participate. “Personally, my organization checked out 48 different locations and, for one reason or another we weren’t able to do this event there,” Mrs. Bailey said. “I did not think I was going to be able to pull this off.”

AL Post 1 volunteered their location for the festivities less than three weeks before the event.

The number of motorcycle riders was lower this year than in other toy runs. An estimated 500 riders attended this years event. Former SCMA president, Rick "Dawg" Venerable, recalled upwards of 3,000 bikers in years past.

"I miss being involved in it, being a part of it," Mr. Venerable said. "I'm glad it's still running and kids are still benefiting."

According to Mr. Venerable, the toy run was named in honor of a former founder of SCMA, David Lewis, who passed away shortly before the toy run.

"I felt it was right to have people to remember him for the man he was and that was a man who would give to anybody," Mr. Venerable said.

Mr. Venerable, who was injured when a drunk driver hit him while he was riding his motorcycle on Feb. 25, 2017, had to relocate to Phoenix, Arizona.

Members from local motorcycle clubs such as the Remnant Sons and the Indian River Brotherhood participated in the ride and donated toys for children along with hundreds of other motorcycle enthusiasts from other organizations around the county.

"They're a bunch of good people. They're not like the stereotypical biker," said Mr. Venerable. "These are people that love to ride and love to do for the community. As with me their hearts are with the children."

Mike Danella, a retired Marine veteran, brought an assortment of small toys and candy to be donated. “I belong to a lot of rider organizations. If there’s a charity where it’s kids, the elderly or disabled, I’m a participant,” said Mr. Danella.

Christine and Steve Bizzuti opted to drive their Jeep to Titusville instead of riding a motorcycle this year. “We had to have somewhere to put all the toys,” Mr. Bizzuti said.

The couple has been participating in charity rides in past years. “We’re friends with one of the sponsors, Island Cremations. They do this every year and we join them,” said Mrs. Bizzuti.

Attendees filed in and out throughout the afternoon to drop off toys, sampling food and checking out the array of merchandise available from participating vendors. Drone footage providing the scope of the event was shot and is available on the SCMA Facebook page.

The AL Post 1managed to accommodate over 500 motorcycles at their location during the afternoon’s festivities.